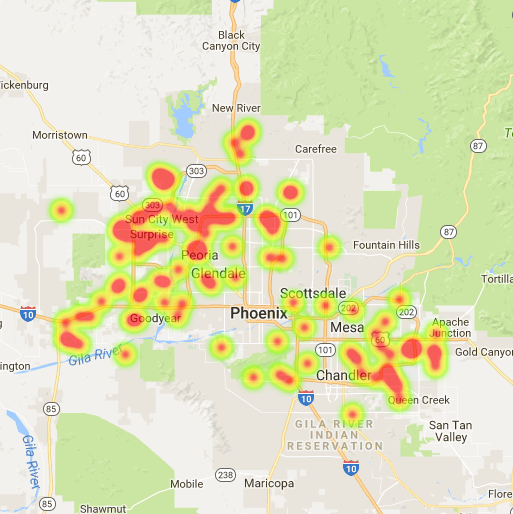 Phoenix area solar home sales dropped off of their normal pace in the Phoenix area according to recent data from the Arizona Regional Multiple Listing Service (ARMLS) from November 1, 2016 to November 30, 2016.

There were a total of 110 verified solar home sales in Maricopa County for the month of November, down from the 141 confirmed sales in October. Homes with a solar leases (whether monthly lease payments or prepaid monthly solar leases) accounted for 79 of the 110 sales (71.8%) while homes with solar owned electric systems accounted for the balance of 31 (28.2%) of the Phoenix area solar home sales in November 2016.

The median days on the market for a resale home in Maricopa County was 42 days in November 2016. Solar in general stayed within reach of the average market with an median time to sell at 45 days (up from 42 in October). Phoenix homes with a solar owned system took a little more time with an average of 53 days while Phoenix area homes with solar leases were on par with the market at 43 days. The average days on the market for a solar home in Maricopa County was 58 days versus a market average of 58 days (solar leases had an average market time of 51 days while solar owned was 73 days).

Impact of Mortgages on November Solar Home Sales in Phoenix

Mortgages helped finance 83.6 percent of all solar sales in the Phoenix area in November, down slightly from the previous month. Conventional financing (Fannie Mae and Freddie Mac mortgages) accounted for 51.8 percent of the total solar home sales in the Phoenix area while FHA and VA financing total 20 percent and 11.8 percent respectively. Cash home buyers purchased 16.4 percent of the total Phoenix solar homes for sale in November. Sellers contributed towards buyer’s closing costs in almost one-third of all sales (35.5 percent).

NOTE: Only resale single family residences that sold during the month of November 2016 in Maricopa County with a sales price of $500,000 or less were used in the analysis (non-luxury market). Properties priced over $500,000 fall into the luxury category and were not used in this analysis. All sales were verified to have a solar electric (solar PV) system that was owned outright by the home owner or had a solar lease. While all attempts were made to ensure quality and accurate data, I am limited by the data reported (for example, only 22.7 percent of listing Realtors actually inputted the size of the solar system). Homes with only solar water heaters or solar thermal pool systems that did not have a solar electric system on the roof were not included due to the extreme differences in these types of systems.