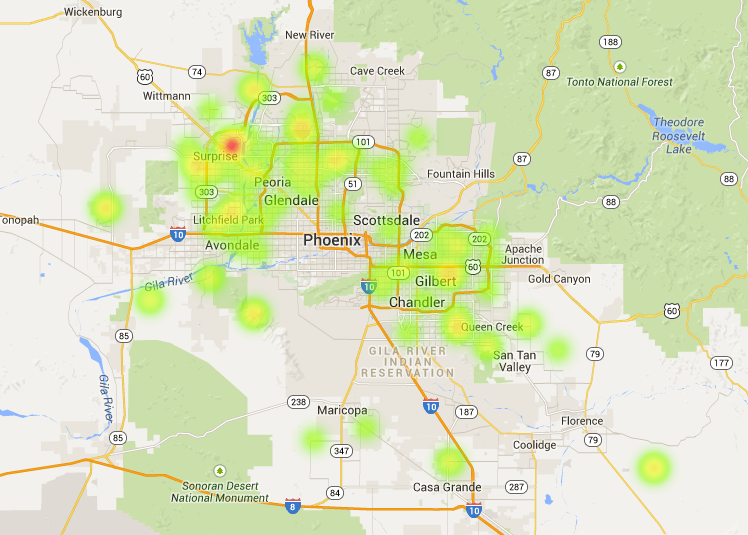 Phoenix solar home sales were up 2 percent in the month of October but the news is not all rosy, according to data from the Arizona Regional Multiple Listing Service (ARMLS).

In October 2014, there were a total of 102 solar home sales, 44 solar homes had a solar lease while the other 58 homes had an owned solar photovoltaic (PV) system on the roof. October returned to the norm that we have seen all year, with the exception of September, where solar owned systems outpaced homes with a solar lease.

The median price for a solar home in October dropped to $230,000, down 17.1 percent from the previous month but still 19 percent higher than the Phoenix median sales price of $193,000 in October. Single family homes continued to dominate the majority of the solar home sales, representing 98 percent of all solar home sales for the month.

The big surprise was the jump in the average days on the market for a solar home which increased to 95 days, up from the average of 76 days in September…ouch! My belief is that we are seeing the slowdown typical for this time of year and solar listings are hypersensitive to minor shifts in the statistics.

Financing continued to play a significant role in Phoenix solar home sales. Conventional financing (Fannie Mae and Freddie Mac mortgages) accounted for 54 percent of the total solar home sales in the Phoenix area (up from 44 percent in September) while FHA and VA financing total 17 percent and 10 percent respectively. Cash home buyers purchased 21 percent of the total Phoenix solar homes for sale in October, down slightly from September.

Overall activity should begin its holiday slowdown though there are parts of the valley when real estate activity begins to heat up. While the decline in values and increase in inventory was expected, I was not expecting to see such a dramatic jump for the days on the market for solar homes. Market pundits are expecting interest rates to increase in the coming months which should have a depressing effect on sales, I am not one that is saying we are going to see a significant drop in prices. Overall there are still a lot of buyers that could, though have not, enter the market such as the boomerang and millenials and it will just be a matter of time before we see them re-enter the real estate game in Phoenix. You can read more about the general real estate market in Phoenix and the monthly sales at GreenLeafAZ.com