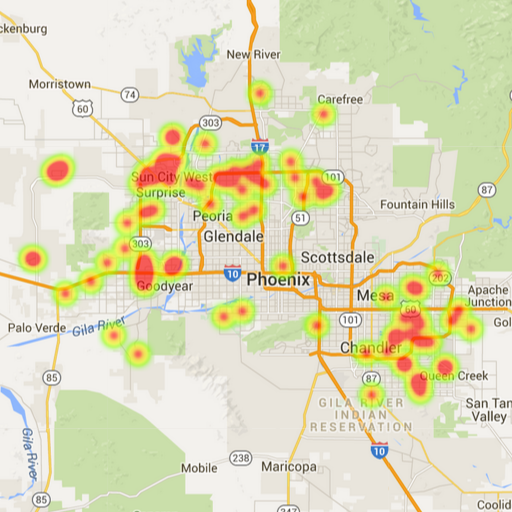 While the real estate market as a whole dropped 2 percent , the percentage of solar home sales in the Phoenix area held steady at 1.91 percent,  according to recent data from the Arizona Regional Multiple Listing Service (ARMLS) from September 1, 2015 to September 30, 2015.

There were a total of 90 verified solar home sales in Maricopa County for the month of September, down from the 93 confirmed sales in August.  Homes with a solar leases (whether monthly lease payments or prepaid monthly solar leases) accounted for 55 of the 90 sales (61.1% versus 76% the previous month) while homes with solar owned electric systems accounted for the balance of 35 solar home sales in September 2015.

The average days on the market for a resale home in Maricopa County was 56 days in September 2015.  Solar in general outpaced the average market with an average time to sell down to 52 days.  Phoenix homes with a solar owned system took considerably less time with an average of 39 days while Phoenix area homes with solar leases took 60 days in September. The median days on the market for a solar home in Maricopa County was 34 days versus a market average of 38 days (solar leases had a median market time of 40 days while solar owned was 30 days).

Mortgages helped finance 87.8 percent of all solar sales in the Phoenix area in September, up slightly from the previous month.  Conventional financing (Fannie Mae and Freddie Mac mortgages) accounted for 54.4 percent of the total solar home sales in the Phoenix area (down from last month) while FHA and VA financing total 24.4 percent and 8.9 percent respectively. Cash home buyers purchased 12.2 percent of the total Phoenix solar homes for sale in September.  Sellers contributed towards buyer’s closing costs in one-third of all sales (33.3 percent).

Overall, the real estate market inventory has increased 5.5 percent as sales declined 2 percent month over month. While it should not come as a surprise to any market watcher, September numbers are generally very weak as we exit the summer doldrums and enter into the fall buying season.  Inventory should slowly increase until the first of the year when market activity heats up.  Anecdotally, real estate agents overall are still across the board with their marketing of solar homes, pushing for estimated savings and the key component to selling.  Some of the agents continue to struggle with lease transfers, not usually as a result of the leasing company or buyer’s inability to qualify for the lease, but due to the lack of foresight to include the lease transfer in the contract and oversight of the transfer process.

NOTE:  Only resale single family residences that sold during the month of September 2015 in Maricopa County with a sales price of $500,000 or less were used in the analysis (non-luxury market).  Properties priced over $500,000 fall into the luxury category and were not used in this analysis. All sales were verified to have a solar electric (solar PV) system that was owned outright by the home owner or had a solar lease.  While all attempts were made to ensure quality and accurate data, I am limited by the data reported (for example, only 28.9 percent of listing Realtors actually inputed the size of the solar system).  Homes with only solar water heaters or solar thermal pool systems that did not have a solar electric system on the roof were not included due to the extreme differences in thse types of systems.