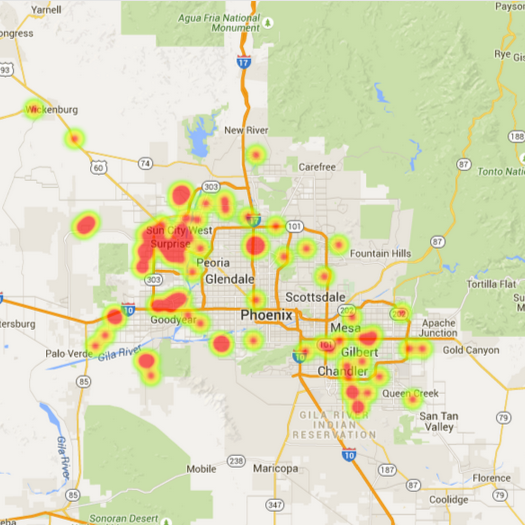 The headline for the month of July is, “Solar Leases Maintain Pace with Remainder of Resale Market” since homes with solar leases sold just as quick as resale homes in Maricopa County.

The number of solar home sales in Maricopa County (Phoenix, Scottsdale, Surprise, etc…) was down slightly in July 2015 when compared to June 2015,  according to recent data from the Arizona Regional Multiple Listing Service (ARMLS) from July 1, 2015 to July 31, 2015.

The average days on the market for a home in Maricopa County was 59 days in July 2015.  Homes with solar leases matched pace with the average resale, also taking an average of 59 days to sell.  Solar in general took an average of 63 days to sell since homes with owned solar systems averaged 80 days for the month of July.

Mortgages helped finance 85 percent of all solar sales in the Phoenix area in July (a fairly consistent number each month).  Conventional financing (Fannie Mae and Freddie Mac mortgages) accounted for 45.9 percent of the total solar home sales in the Phoenix area while FHA and VA financing total 24.5 percent and 14.3 percent respectively. Cash home buyers purchased 15.3 percent of the total Phoenix solar homes for sale in June.  Sellers contributed towards buyer’s closing costs just over a quarter of all sales in July (28.6 percent).

Sales were on fire in the northwest valley, especially in the Sun City and other 55+ communities. (see Phoenix solar heat map).

Statistically sales should have peaked for the year and expect to see a decrease in sales activity next month.  Overall inventory of homes for sale and hovering just above the 19,000 home mark.  It is not uncommon to see the see-saw effect of solar homes selling faster and slower than the regular resale market as a variety of factors often influence a seller’s ability to sell a solar home such as actual electrical savings, competency of the Realtor to assist in the marketing and transfer of solar, the curb appeal of the home, and the pricing of the solar home.  Many agents are still struggling with these aspects since they lack experience and education about solar and its impact on a home.

Considering selling a home with solar? Want to know how much additional value solar adds to your home? Give the Solar Home Broker a call at 480-888-1234!

NOTE:  Only resale single family residences that sold during the month of June 2015 in Maricopa County with a sales price of $500,000 or less were used in the analysis.  Properties priced over $500,000 fall into the luxury category and were not used in this analysis. All sales were verified to have a solar electric (solar PV) system that was owned outright by the home owner or had a solar lease.  While all attempts were made to ensure quality and accurate data, I am limited by the data reported (for examply, only 20.6 percent of listing Realtors actually inputed the size of the solar system).  Homes with only solar water heaters or solar thermal pool systems that did not have a solar electric system on the roof were not included due to the extreme differences in the two types of systems.